Founded on July 1, 1959 by Dr. José Picó in the Municipal Hospital of San Juan, Puerto Rico, the Otorhinolaryngology residency program originated the development of this specialty in Puerto Rico. Eleven years later, the residency reorganized into the School of Medicine of the University of Puerto Rico. Dr. José Picó directed the residency program until his retirement in 1974, when he subsequently passed on the program’s direction to Dr. Antonio Rullán. Dr. Rullán carried on the academic program’s development and the commitment to provide superb medical services to the puertorrican population. Later on, in 1978, Dr. Juan Trinidad would become director of the program for the subsequent three decades, becoming a mainstay in the training of Otolaryngologists in Puerto Rico. In 2008, Dr. Carlos González Aquino became director of the Otolaryngology-Head and Neck Surgery residency program and, in this way, expanding the provision of medical services, faculty recruitment, research opportunities. It should be emphasized that, since its origination, the residency program features the highest accreditation standards and a strong commitment to train Otolaryngologists of distinguished qualifications. 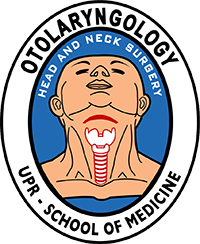